It's the hubby's birthday 🎂 today so I'll just give him his gift... hold on!

I gave him the frame first, which totally confused him 🤣

Then the painting tube and he looked at me in confusion.

When he carefully opened the tube, the painting was wrapped in protective brown paper, which caused even more confusion.

He unrolled it and when he saw the painting his mouth dropped open in surprised delight❗  Yaaaaay❗  To quote him as soon as he saw it "that is sooo her❗  The tongue and position and everything just screams Mitzi❗"  The painting is now in the frame and waiting to find somewhere to put it up.  It took a long time to plan and the result is sooo worth it❗

Happy birthday Steve, from me and Mitzi-moo❗
➰➰➰

Puppy took me for a marathon walk this morning and met 2 cats during our stroll so kept trying to pull me over❗  Thankfully I managed to stay on my feet while she was trying to make friends with them, but there was more anxiety on my part than usual, 'cos if I'd fallen over I wouldn't have been able to stand up again 😟  Thankfully she didn't poo which would have sent the anxiety through the roof when I picked it up 'cos there weren't any cars to lean on throughout our lengths.

That's it for the day now though, just gotta find out roughly what time the puppy is going back to Helen's so that I can put her harness back on after Steve took it off, despite me saying just to unclip her lead.

Steve's just called my surgery to find out when the flu-jab session is after it was resheduled.  He thought it was this Thursday but I knew it was resheduled to the 31st but couldn't remember the time.  It's between 2pm and 6pm, so he's told his mum the right date and time now... hope 🤞 the queue isn't too big 'cos there's no way I can stand!
➰➰➰

Only been awake for 4 hours, but I've already walked more than my target steps, distance and active minutes according to my Fitbit.  Hasn't recorded my sleep though, so right now it's a 4 star review in January.  If it sync's later on then it'll go back to being 5 stars, but I'm not going to manually track my sleep any more.
➰➰➰

Here's the photo of Steve's assembled birthday gift from me: 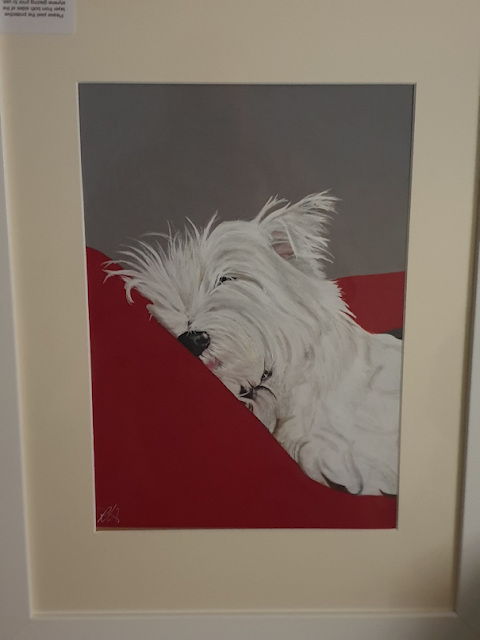 We both love it and it's better than I was thinking... thank you so so much, Robyn Heath (you can see her site here or search for her on Facebook at robyn art heath)❗❗
➰➰➰

Just finished reading and reviewing a MG book which is why I haven't been very chatty on this blog so far today.  Got some photo's of the puppy to put on my site now though, so I'll do that now while I remember 🤣
➰➰➰

Prescription taken, so I'll be off to bed 🛌 soon.  I've put the spreadsheet up for last week onto my Fitbit page if you want to go and have a peek❓  Gotta remember to add the email report to that page tomorrow morning.
➰➰➰

Just started yawning 🥱 so I'm off for an early night 💤.