Just taken my Folic Acid and don't feel sick at all, so I obviously need to take that on an empty stomach and the OAB pills when there's something lining it.  Gonna have a fruit pie so that I can take my OAB pill, then take me supplements.

The virus scan started this morning but had to restart before it started, so it was 8.30am before it properly started, but that's OK 'cos it finishes in the early hours then shuts down my machine.

I've said to Steve that I wanna practise going up and down slopes today in preparation for my appointment on Monday morning.  I've done it a few times before without falling over, it's purely to increase my confidence.  Assuming that goes OK, next week it'll be on and off kerbs alone and I want Steve there again, purely to give me confidence that I can do it.  I've got a quad cane so there's no way it'll fall over even if I let go of the handle, I just need to increase my confidence in using it is all.  Slowly but surely is the way to go and I know I can do it 'cos there's a slope into the car park of my doctor's surgery, which is why I want to build my confidence in that first.
➰➰➰

That's the morning pills taken and I feel fine atm, so as long as I keep taking the Folic Acid on an empty stomach, first thing in the morning, I'll be fine and dandy.
➰➰➰

Just moved over the mortgage money and I've told Steve that if the software and page are finished by the end of the month then he doesn't have to pay it back, but if it's not, I want the full £2600 refunded.  Don't see why I should have to pay for something in advance, that turns out to be over budget and overdue.  😠  None of his other customers pay in advance or nearly double the price, so why should I just because I'm married to him❓ 😠
➰➰➰

Steve's just said that he'll walk with me and the pup, but not just me... knew that would happen 😞  I'm gonna finish my mug of coffee then go out and do it alone.  Again.  😠  I just wanna learn to do it alone so that I'm not stuck outside the docs 'cos I can't go down the slopey bit.  Maybe it's a blessing in disguise though❓  With Steve not coming with me, I've got no choice but to cope with it alone, just like when Steve's dad takes me to the doctor on Monday.  I know I'll be OK, I just need to work on my confidence is all... need to learn to trust the quad cane instead of barely using it is all.
➰➰➰

Just done it, totally alone and very unsteadily, but I did it❗❗❗  🏆  Gonna give it a couple of hours to recover a bit then try again.  I'm gonna keep trying until I've built up confidence in myself and the quad cane.  Just need to take things slowly and keep pushing myself is all.  I'm determined that it will happen by the end of October 'cos I've barely used the quad cane since I got it back at the end of August 2013 and it's pointless having it if I don't use it❗
➰➰➰

Another 1½ times, which is a total of 2½ times up and down slopes in about 20 minutes.  That's it now though until I've had me lunch and I'll try again at least once more this afternoon.  My confidence is already a lot better, but my anxiety and exhaustion are through the roof so I'm gonna give myself a couple of hours before I try again.  I will achieve it, slowly but surely, before Monday.  Steve not coming was definitely a blessing in disguise because I had no choice but to do it alone, just like I will have to on Monday.  Soooo proud of myself 😌
➰➰➰

This describes why I'm so determined to tackle slopes today: 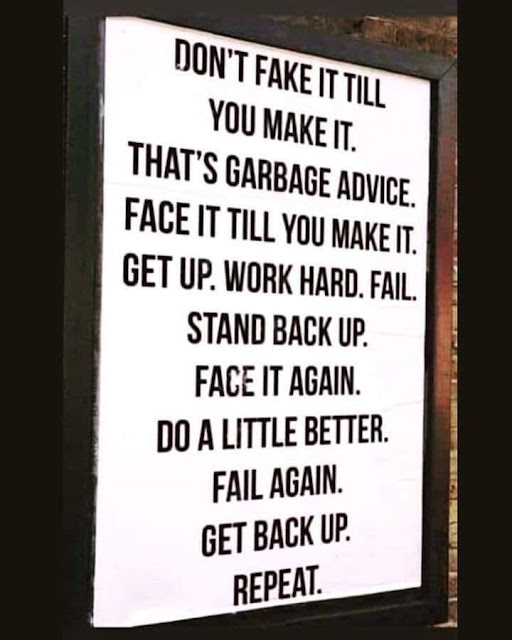 I will conquer slopes by the end of the day and then gradually work on my confidence levels.
➰➰➰

Just taken me daily Calcium - went down nice and easily this afternoon, thankfully.  We're having zoop for lunch because of the weekly virus scan and Steve's cooking the last batch of veggie sausage rolls to celebrate part one of the slopes then we're celebrating again this evening after doing part two of the slopes after lunch.  Can't wait❗
➰➰➰

Didn't manage the second set of slopes after all, but tomorrow is a new day and I'm not going to give up until I've done it and I'm not constantly anxious about every step.  It'll be so hard but so worth it too.  Time for me prescriptions now though... gonna have an early night too - think I deserve it 🤣
➰➰➰

That's me prescriptions down the hatch so I'm gonna head straight to bed 🛌 I reckon.