Gonna take my morning pills then sort out the rubbish, card, paper and recycling (I don't think there's any food waste this week), then take the puppy out for our morning stroll.  Gotta remember to put the toilet roll tubes in the blue bag so that they'll be taken and Steve's just cleared up loads of his recycling too, so we'll prolly have to use 2 of the 3 recycling boxes, which makes me grateful for the third one being delivered this week.  Gotta clear up the puppy's poo from the back yard when we come home from her walk too.  It's only once a week which is totally OK with me.  Just hope I don't fall over 'cos I won't be able to get back to my feet.
➰➰➰

That's me dosed up for the morning now.  Gotta remember to put my pills in the weekly sections of the box today too, ready for next week.  Just gotta remember to take my Calcium at lunchtime, then that's it until tonight.
➰➰➰

I've just rejected a request on one of my groups from someone who wanted to "archive all the messages before they get deleted".  That person's using a gmail address so it's nothing official and I've already archived all the messages using the YahooGroups official method so it screamed spammer/scammer to me and I want to protect the people on all the groups I've got so I rejected it 🤷.  I don't want people selling my email address so I want to do everything possible to protect the genuine members of my groups too❗
➰➰➰

That's the rubbish, card and recycling sorted and the puppy's poo cleared up for another week.  It's a good job I took the puppy out for her stroll when I did 'cos it's hosing it down out there now❗

I'm starting to feel more confident about walking around the back yard without my quad cane now.  Still anxious, but nowhere near as bad as last week, thankfully.

We're having mince pies and crisps for lunch today then Steve's promised we'll have zoop for lunch tomorrow, when he gets back from his medical appointmentm which is fine by me!

We're coming together as a team at last now... it's only taken us a quarter of a century 🤣
➰➰➰

That's the Calcium taken and next week's pills in the pill box so I'm all sorted for the next 7 days now.  Had the crisps, but Steve is too full for the mince pies right now, so I'll wait until he wants his pud before I crack them open and have mine.
➰➰➰

Put 2 video's of the senior puppy up on my site, so it's time to crack open the mince pies now, then I'll take my prescriptions and head to bed for another early night.
➰➰➰

That's me AP prescriptions taken, so I'm gonna be heading to bed as soon as the side effect starts kicking in.
➰➰➰

Steve's gift from Mitzi is on its way so hopefully that and my prescriptions will be delivered next week.  Meeting up with C on Tuesday so that he can take his and H's Yule gifts back with him.  They are, by far, the heaviest gifts so I'm hoping I'll be able to keep hold of them while I'm coming down the stairs on my bum.  They are the most fragile gifts too, so I hope they are still in one piece by the time it gets back to Bristol and they're opened on Christmas Day❗

Steve's just made me a mug of decaf tea so I'll head to bed when I've finished drinking it and hopefully the AP will be kicking in by then too.
➰➰➰ 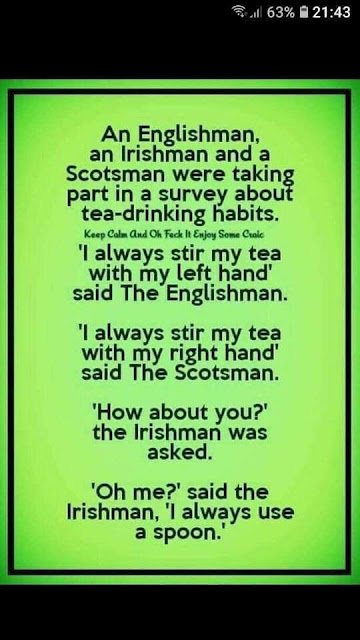 Just uploading that joke up there ⮙⮙ to my humour page then I'm off to bed.