Haven't had any comments about which colour to use for the text, so what colour do you reckon I should use today?  Orange?  Red?  Yellow?  Fuchsia?  Yeah, Fuchsia today... mind you that isn't so much different from black, so should I go with this or black or red?  I'll stick with this for now, but might change it later on.

I've taken all my morning and lunchtime pills, so I've only got the AP's to take tonight now.  Having my first dose of caffeine this week too and apparently I need to add more to the shopping 'cos there's only a scoop and a half left, so I'll do that now.  Gotta take the puppy for her first stroll of the day too... gonna finish off my coffee first though 'cos the puppy is still sleepy, bless 'er.  Steve's just said it's raining outside too, so I'll take her out when the rain has hopefully eased off a bit.
➰➰➰

Walked and fed the puppy dog now, and I'm pondering on, when I can afford it, getting a camcorder that I can put around my head to prove that I pick up the puppy's poo, that I take her for two strolls a day and also that I've got proof of exactly were I walk her so that the council and/or the police can use it as evidence if they need to.  Might even upload each video to You Tube so that you can join us both on her strolls as well as while she's in the house 🤣.  It'll have to be a cheap camcorder so possibly poor quality video's, but it's better than what I've got now.
➰➰➰

OK, so found a cheap and cheerful camera for just under £20 that seems to do everything I want as well as coming with straps to hopefully go round my neck, alongside the counter and apparently the battery lasts for an hour and a half, so as long as I turn it off between walks, I would only need to charge it up once on a Monday and still hopefully have enough charge left for one more walk on Tuesday, then charge it up again and it'll keep me going for most of the rest of the week before I need to charge it up again.

Assuming the quality is good enough I'll be able to video the cat poo's to send to the council as well as being able to have evidence for the police about picking up her poo and exactly where I walk her as well as what is said if needs be.  They can't argue with an unedited video recording after all❕

Just need to save up for it now - shouldn't take too long... it won't be in February 'cos I can barely afford the bills and shopping for the rest of the month as it is, but as soon as I can afford it I'll definitely buy it❕
➰➰➰

Found a picture on my Facebook wall with an acronym of depression so I'll put it on the depression page of my site and add it here too: 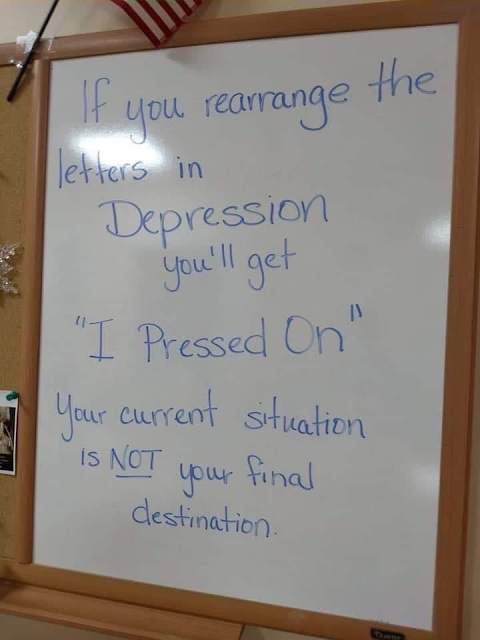 Just taken the puppy for her second stroll of the day and our lunch is almost ready, so I'm gonna put my laptop on the floor and go for yet another wee (my 10th in about 3½ hours - yes, I have been counting) then bring my lunch in, eat it and fall asleep 🤣
➰➰➰

Cor lummy, we're both bloated now... spag bol with proper spag instead of our normal pasta shells or twirls or whatever.  Steve said about putting the two packets of spaghetti into a jar and then that'd make three more sensible sized meals instead of two with quite a bit left over/wasted.  We've got a spaghetti jar in the kitchen, we just haven't used it for well over a decade so will need to be soaked and deep cleaned before we use it the first time, just to be sure we aren't accidentally poisoning ourselves or whatever.

I've put more "posh coffee" in the basket for a couple of weeks time so my caffeine fix for the next little while will be PG Tips tea... need to remember to eat something before I have it though, or it'll go straight through me again, like the coffee this morning 🤣
➰➰➰

Steve's just sent me a link to a large pod of wild dolphins 🐬 showing off alongside a boat that you can see here.  My heart is totally melting and I've got a smile plastered to my face now.
➰➰➰

That's me last two pills of the day taken and I want another early night, so I'm gonna shut down soon
➰➰➰

Just done some online surveys and the AP's are kicking in now, so I'm off to bed now.

Posted by Amanda George at 8:30 pm